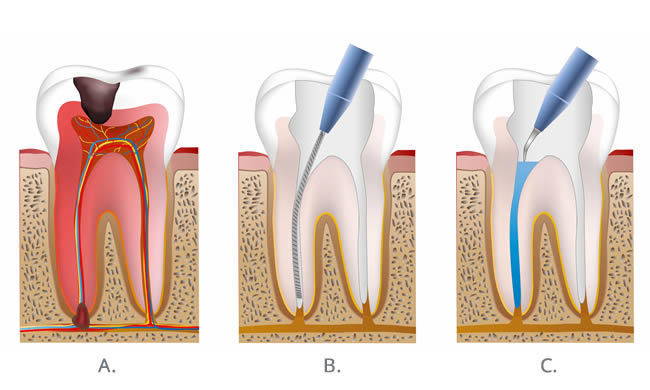 If the pulp becomes infected by bacteria it will begin to die, which could result in the loss of the tooth. There is also the risk that the infection could spread down into the root canal, which may lead to the development of a painful dental abscess (a pus-filled swelling). The infection could then spread to your gums (causing a perio-endo lesion) or the tissue and bones that support your teeth (periodontitis). This is often dealt with by a specialist Periodontist.

Root canal treatment is designed to save the tooth and prevent the risk of root canal infection. The inflamed or infected pulp is removed from the tooth and the root canal is then cleaned of all bacteria. After the bacteria has been removed, the root canal and pulp are filled in using an artificial substance, before being sealed.

Root Canal Treatments Before and After

What Causes Root Canal Treatment to Fail & Lead to the need for Re-RCT?

A few reasons why your initial root canal treatment could have failed include:

In case of root canal failure, 3 options are available for re-root canal treatment in Dhaka – patients can either opt for:

Today, well-trained general dentists and root canal specialists (endodontists) alike can perform non – surgical endodontic root canal re-treatment, which is very cost effective, time saving and quite predictable as compared to other treatment alternatives like tooth extraction. But at times the root canal failure case cannot be re-treated by non-surgical methods. In these cases, dentists can use surgical endodontics to re-treat a root canal failure case, which may be preferred over tooth extraction.

The main aim of non-surgical endodontic procedure is to save the endodontically failed tooth. But at times, patients’ own dental crown needs to be removed. In some cases, access can be made possible through the existing crown. This crown may later need to be replaced.

When access to the pulp chamber has been effectively gained the procedure may further involve the following steps:

Once these objectives are achieved, the root canal space is cleaned well, re-shaped, completely disinfected and finally sealed.   A protective restoration can then be placed in the end to restore the proper tooth form, function, and aesthetics.

Surgical method of treating a root canal failure case involves raising a small flap adjacent to the involved tooth to gain entry and treat the root canal infection. Surgical line of root canal treatment is a minor in office procedure done under local anesthesia. When the infected area is exposed the dentist performs curettage (the removal of diseased and infected tissue by  scooping).

This is usually followed by the apicoectomy procedure in which the infected root portion especially the root tip is removed. A small filling is then placed from the root end side to seal the left healthy part of the tooth root. Surgical endodontic procedure tends to give a good long term prognosis if the entire infection can be effectively eliminated.

Unfortunately, at times the re-treatment efforts and surgical endodontic procedures may not be possible or cost-effective and tooth extraction may be the only alternative. But to save a previously endodontically treated tooth which is failing is usually possible and predictable, being the most conservative option for the patient.